Hofmeister Sensei is a senior instructor for Aikido Schools of Ueshiba (ASU), teaching regularly at Boulder Aikikai and at seminars throughout North America and abroad. Hofmeister Sensei is also a certified practitioner of the Feldenkrais Method®. He has a particular interest in the process of learning in Aikido and its relationship to self-understanding. 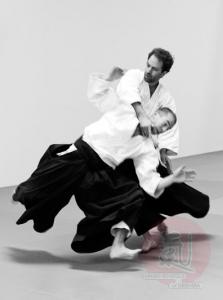