George Ledyard Sensei began his Aikido studies in 1976 under the direct instruction of Mitsugi Saotome and has continued this association ever since. Ledyard Sensei currently holds the rank of 7th Dan in Aikido and Shodan in Daito Ryu Aikijujutsu. He counts Hiroshi Ikeda, William Gleason, Howard Popkin, Mary Heiny, Tom Read, Endo Seichiro, and Dan Harden as strong influences on his Aikido.

Ledyard Sensei was recently made a member of the Ueshiba Juku by Saotome Sensei. This connotes a direct line of “transmission” from the Aikido Founder, Morihei Ueshiba, through Saotome Sensei to his personally trained students.

He is the Founder of Defensive Tactics Options™, a system of police and security training which specializes in less-than-lethal force alternatives and Options for Protective Control™, an ultra low-level force system for physical intervention with juveniles and emotionally disturbed subjects.

Sensei Ledyard believes that Aikido should be both a spiritual practice and a martial art. He is known for his work with the staff and sword and also for an innovative approach to applied empty-hand technique which brings in elements from his training in Japanese Koryu, Iaido, Filipino martial arts and Systema. He has  over thirty five years of Aikido teaching experience. In addition to teaching Aikido seminars internationally, Ledyard Sensei was invited to participate in the first three historic Aiki Expos and is a regular contributor to both AikidoJournal.com and Aikiweb.com. He is the author of over 10 DVD instructional DVDs on empty hand and weapons in Aikido (www.AikidoDvds.Com). 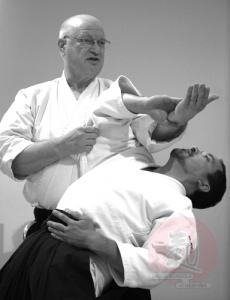